Are You Fit Enough to be a Grandmother? 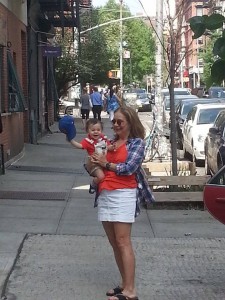 Imagine my surprise when I, a 62 year old personal trainer and avid cyclist who can ride a bike at the side of the mountain, became a grandmother a year and a half ago. A few weeks after my grandson, Magnus, was born, I noticed a recurring, nagging pain in my right shoulder and neck. I asked myself the question I always ask a personal training client when they have a new ache or pain: “What’s new in your life?” Magnus was the answer! It had been over 35 years since I had spent any real time holding an infant. I thought ok, we can focus even our most basic exercises on increasing our strength and flexibility to help us handle the demands of carrying, chasing, & playing with our grandchildren. Tweaking our exercise routine helps me with ( now ) 17-month-old Mags, it helps Laura chase after a 3 1/2 year old it & helps Dena wrangle a 2-year-old & a 3-year-old at the same time. We have a whole range of early childhood activity to adapt to and I have developed a focused exercise plan to help you become stronger and more flexible so you can do so. 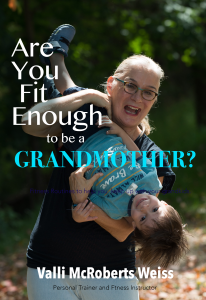 The ebook fitness companion for any woman wanting to fully enjoy the rigors of being with her grandchildren, no matter how fit she may be.  In this straightforward, insightful guide, Valli Weiss will help you get into shape with a complete program that includes videos.

What You Need to Do

Many of my clients in their late 60’s & early 70’s became grandmothers for the first time. When Laura, a very fit woman who’s been exercising with me twice a week for 22 years, said “oh my, I spent the weekend my grandson and my back is killing me,” I knew we needed to address new fitness issues for this new phase of her life. As young mothers (all those decades ago), all the natural physical strength, agility, & flexibility we took for granted when we were 25 or 35 isn’t quite the same anymore. Even when we’ve remained fit, we are little bit stiffer & a little bit slower & not quite as agile as we were back then. Carrying around a small infant or chasing after a small toddler is a whole new physical challenge for our aging bodies.

While the average age of new grandparents in the U.S. is late 40’s-early 50’s, most of the women I work with did not become grandmothers until they were in their late sixties and some in their early seventies. We are Baby Boomers; the generation that refuses to get old. We still ski, run marathons, ride bikes, and take Zumba classes. We haven’t given into aging, we openly defy it. Why then, does 2 hours with a grandchild lay us out flat? One of my new “grandmas” just spent 2 hours with her 2-year-old grandson. It was 2 hours of non-stop movement. It is an endurance event. It’s not just about speed but also stamina, agility & flexibility. You need to train for it!